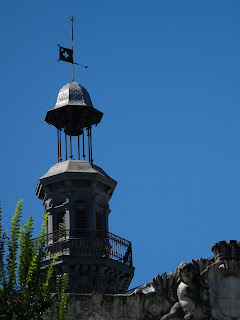 Lucky me, I have discovered something new. Having time to spare whilst waiting for Malyon to turn up from Geneva at the gare routière, it was only natural to wander into cour Dalya, a little hole in the wall in a courtyard off an alley just by the station. It stocks a truly eclectic range of Oriental and Middle Eastern and African products - it's where I got that foufou that I've not yet got around to using - and this time, not too far from the jaggery powder, there was a sad lonesome jug of pomegranate molasses.
Interesting, I thought, but the memory of the foufou came back to me and so my wiser self took control and I walked out empty-handed. And then, that very evening, I came upon this recipe, so on Tuesday I was back there, buying that very last jug. And a packet of jaggery which is, in case you didn't know (full disclosure: I didn't) is raw Indian cane sugar. 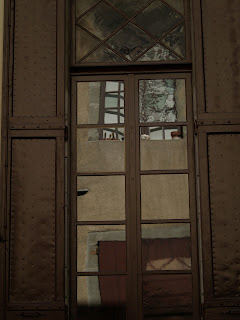 And having these two things to hand, it seemed only reasonable, after last night's hampe with bastard béarnaise and tomato and goat's cheese salad with mint and feuilleté aux trois fromages, to make dessert. As Malyon had generously left two pêches plates in the fridge it didn't take long to decide on what that would be: quickly make up a batch of croissant dough, roll that out into a rectangle, sprinkle it with the jaggery and cover that with thin slices of peach, then fold the long edges over towards the middle to leave a band of fruit exposed and drizzle that with cream (just happened to have an opened pot) and the molasses.
Into the oven with it for twenty minutes or so, and then ... there wasn't that much left, oddly enough. And then Jeremy insisted that I show him how to make Nepalese fried bread, so that he and Malyon would have something to eat the next morning. 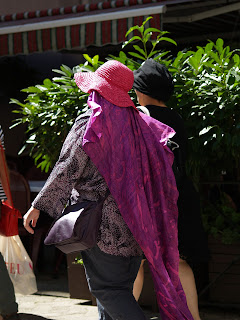 In kind of an odd coincidence, I was talking the other day about Julia Child (can't remember exactly how the subject came up, but that's about par for the course), and of course for the life of me couldn't remember her name! (Not helped when Stacey suggested Alice Waters, which gave me a complete mental block on any other celebrated American female chefs.) Of course I could remember the book title - Mastering The Art of French Cooking - and so quickly googled: had I gone on the site rather than through the search bar I would not had to bother doing even that, as the daily doodle was celebrating what would have been her 100th birthday.
So anyway, Tuesday was Jerry's real birthday, which we celebrated quietly but in style, with roast lamb (with the temperature at night still up in the high 20s, why, oh Lord?) and the aforementioned confiture d'aubergines (whether or not you like it may depend on your garlic tolerance, Sophie found it a bit too much but tough, as far as I'm concerned it was perfect) and salad and stuff. Fortunately, roast potatoes were neither required nor on the menu, given the heat. There were but six of us and we were very restrained, only four bottles and all of those white or rosé. 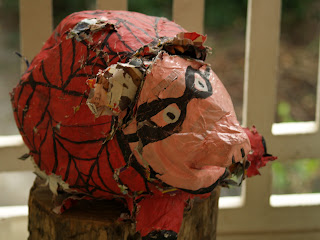 And Saturday night was the proper party. He and Malyon spent Friday making a pinãta in the form of Spiderpig, which they cunningly reinforced to such a degree that he lasted a whole hour under the onslaughts of baton, branch and, finally, thrown bricks: he also, happily saving me quite a bit of work, went down to the paddock with the debroussailleuse and turned most of it into hay.

For reasons best known to herself Stacey owns a pair of pink rabbit ears, such as those to be seen on "Bob's Burgers", and having nothing better to do I though it would be a good idea to wear them as we went off to Carrefour to buy wine and vasty quantities of diots for the party. (Because Jerry thought that perhaps everyone would, now that the proper canicule has arrived, enjoy 100% pig sausages simmered in red wine, along with a kilo of pasta. Going on the evidence, he was not wrong.) 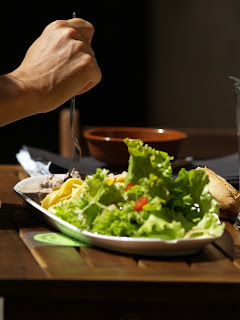 It was definitely a good idea, at least it afforded me great pleasure. Walking through Chamnord and seeing the double-takes and people walking into pillars because they weren't looking where they were going, and then in the check-out queues - hilarious. I think I should be nominated for a Nobel, if the looks on the faces of the three young women just behind me were anything to go by. I have brightened up a few lives.

So as it happens, I was still wearing them when we got back and Jerry's guests started turning up, in dribs and drabs. Lucas & Rémi know what to expect and so were not unduly startled, but I think it would have been nice of Lucas to warn his girlfriend ... she might not have choked so much before bravely giving me la bise. 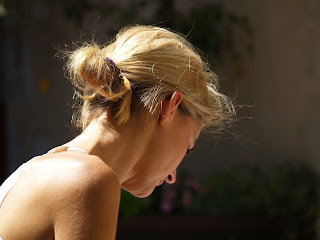 Jerry had organised things very well, and all his lot headed down to the garden to start drinking whilst the grown-ups ate; then Mal bludged a cigar off me before heading down to keep an eye on them and organise the Bashing Of The Pinãta and similar healthy activities,  which left us free to listen to decent music and work out, through experimentation, exactly what temperature you should be keeping red wine at when you're experiencing a heatwave. 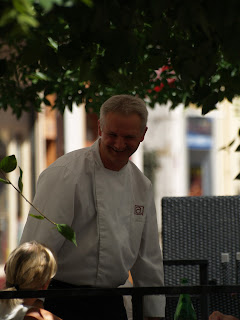 Have to admit that I skived off early, around 3am: can't really hack the pace anymore. Not that the yoof was much better: apparently they were all more or less dead to the world by 4am. Apart from Malyon, who very wisely chose to retire, guessing that if vomiting was to be done it wasn't her problem anymore, around 2.

On an unrelated note, it turns out that I had some bastard puff and some powdered almonds about my person the other day, and finding myself to be in possession not only of my wits but also some raisins, and some jaggery powder, it struck me that it would be a Good Idea to make some little pains aux raisins au frangipane, givent hat Malyon was going to be around. As it happens, I was not wrong.

Now for the classic version you would of course use croissant dough, but as it happens there was no yeast in the house (someone will die for this outrage to morality, but I suspect that it might by my fault so let's not be too eager, OK?) and one does what one can ... 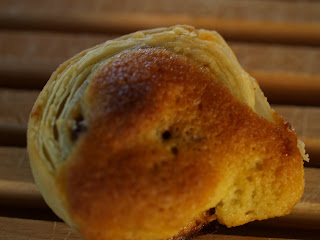 Which, in this case, entails nothing more complicated than rolling out the pastry into a rectangle, spreading it with brown sugar and cinnamon and raisins, then rolling it into a log and then slice, putting the slices onto cooking parchment (please. Those who do the dishes will thank you for it) and than, before they head into the oven, you stick some crème frangipane on top.

Before you get too worried, this is not complicated either, involving as it does just creaming butter and sugar and powdered almonds, then beating in a whole egg and adjusting the thickness by judicious additions of flour or whatever until you have a thick cream. Hence its name. 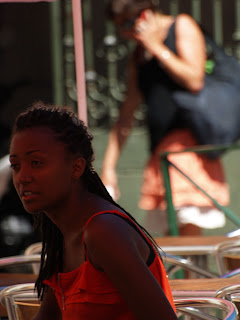 As you can see, my pastry turned out to be not too bad, but I'd rather hoped that the cream would soak in a bit more than it in fact did. Perhaps, next time, I should just stick the cream directly onto the pastry, along with the raisins and everything. Shall ask the opinion of my totally impartial tasting panel at some point.

And just as an aside, I was ambling down rue Metropole the other day and noted, in passing, that outside the little shop that specialises in undertaking and art religieux there was a billboard. Unfortunately I didn't have the camera with me, because although on one side there was a fairly anodyne poster promoting funeral insurance, the other side was advertising gravestones.

And not just any old gravestones either, there was the "Classique", the "Inhumation", and the rather tasteful "Crémation", which is kind of small and, from what I could make out on the photo, came with a handy flip-top lid. The photos themselves were pretty much on a par with what I'd expect from a small flyer advertising the local supermarket specials: at least they didn't have "Promo!" in bold red letters across them. 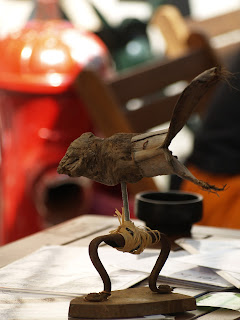 Anyway, it is, as they say, caniculaire around here: temperatures are up in the low 40s and there's not a breath of air and on the rare occasions there is one you kind of wish it hadn't bothered because it's about as dry and hot as the Sahara.

So I personally am going to slump down in my chair and try to avoid melting into a puddle of grease, until I can summon up the will-power to move, and head home to where the chilled rosé is lurking. Margo, in Birmingham, has probably had more liveable temperatures than us.

Mind how you go, now.

This is the more or less irregular diary of the Bimler family - a couple of ordinary New Zealanders who, through no fault of their own, found themselves in France in 1987 and decided, for some strange reason, to stay. Settled down, raised a family, and lived happily ever after.

I've put it up as a blog for the simple reason that I can, and it amuses me to do so, and who knows - it might turn out to be an important historic document one day (although I rather doubt that).

The years from 1987 to 1998 are missing because Al Gore hadn't yet invented the intertubes, and I can't be arsed retyping the paper copies (they still exist somewhere on 5" floppies, but the Compaq transportable used to create them went to its rest a long time ago, along with the Ashton-Tate word-processing software).

Much to my surprise, OCR technology has improved beyond belief in the past 15 years. It even handles fantasy fonts like Unicorn and such without too many problems (apart from insisting on calling me "Tremor"). So I've actually started scanning in the old paper copies, starting in '87, and will get around to sticking them up at some point. Preferably when I've worked out how to get blogger to post things in the order I want, and not its bloody chronological posting order. It must be possible, I just have to read the help files ...

Been there, done that. Just had to go into "Post Options" and set the publishing date to what I wanted: bloody yank mm/dd/yy format of course, but I can handle that ... so as you can see, things are a bit more organised now. Might even get to sticking up a few more photos while I can: they'll only go back to 2003 mind you, 'cos that's when I got my first digital camera and I am so not going to go and scan in all the older photos. Although I suppose I could get some of them done ...

Just by the way, all the photos posted here are in fact mine, taken with the trusty if somewhat clunky old Olympus E500, unless otherwise noted. So no-one else is to blame if they're out of focus, or whatever. They're usually totally unrelated to the subject matter, and are there just because I think they're not too bad. You may disagree: if so, please feel free to keep it to yourself.