Chairman of the Bored ... 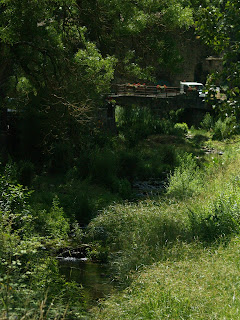 Well, here I is in Strasbourg - or more precisely in Lingolsheim, some 10 clicks to the west - and already after only one day I am heartily bored. Bored completely witless, doing a Neville, ennuyé à mort ... the most exiting thing that's happened all day, apart from a good stretch and a discreet belch on waking up, was watching a hedgehog snuffling around on the admittedly immaculate lawn this evening.

Tomorrow and Friday will surely be more of the same (although let it be said, there's the promise of a repas gastronomique tomorrow lunchtime, shame I'm not really a fan of hearty lunches), which will give me the entire weekend actually doing something vaguely interesting ie wandering about Strasbourg and poking into its crooks and nannies before being confronted with a whole glorious week of terminal ennui, after which I can go home for a week before yet another five days of the same ... have I mentioned that it's gray, cold and damp? Didn't think so. 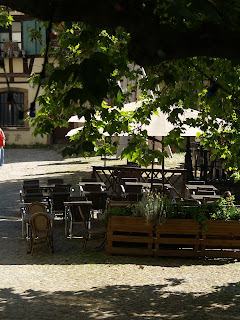 Happy update! I must have done some good deed at some point in my life, for the client has come to exactly the same conclusion as I: namely that my presence for the next week is surplus to requirements! Consequently I shall catch a somewhat too-early train back southwards on Sunday moaning for another two weeks of basking in the sun before heading back up on the 19th, and at least for that week I should be doing something useful and actually productive, always makes me feel better. 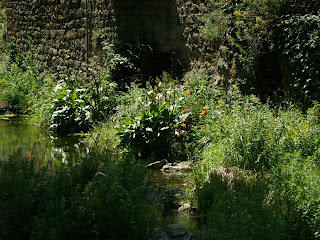 Anyways, I made it into Strasbourg and had a fine old time wandering about: place is as lovely as I remember it from 30-odd years ago. And the beer is exceptional, you really should try the blanche should ever you find yourself there (and there's a very pleasant bar on the place du Marché Gayot which will happily serve it to you, but don't forget to specify 25cl unless you're really up to knocking back a full half-litre). 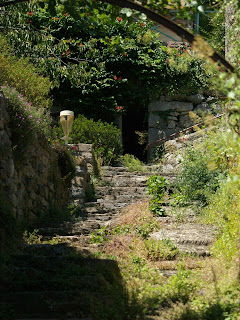 And a very nice lunch at a winstüb just down from the cathedral: a little martini rosso as apéro followed by a fairly decent (if a bit under-seasoned, to my taste) foie gras with excellent toast (yes, this is important) and a glass or two of pinot gris to help it go down. The only thing that disappointed was the fact that a bowl of piping-hot frites turned up as well but I quickly shooed them away, for it would have been an abomination. Yah, I know, I'm an old snob. Guilty as charged.

Handy hint, by the way, for identifying the actual Strasbourgeois: they're the ones with the skins the exact same delicate milky white of a troglodyte axolotl. Suppose they don't really get out in the sun that much … 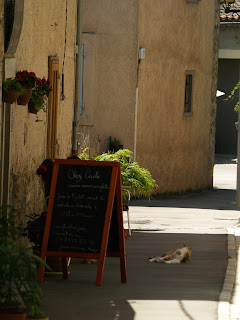 Getting back here, I found myself (as one will) at the bar the other day and there, sitting on the counter, was a bottle of Uby. This is a wine I've met before, fell in love with and then, sadly, forgot … I'm glad we've encountered one another again. The N° 4 is semi-sweet, which is not usually to my taste but it's so good I'm willing to make an exception, with incredible notes of pineapple and passionfruit … I think it must have been the very first wine I tasted where I could actually pick up this sort of thing. Not that it hits you about the head with it, but you can't help but notice.
I asked Eric to order me a half-dozen bottles the next time he has occasion to top up the supplies (judging by last night's crowd that'll not be far off): I suppose I could just head off to CDD at Lézignan, who have the stuff in stock, but I kind of have moral objections to dealing with them unless it's absolutely necessary (ie run out of wine on a Sunday afternoon). 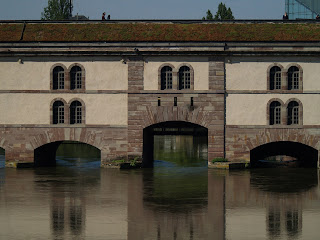 Sadly, although the chateau does in fact have a website it's of precious little use to me because there's no possibility of ordering online. So I can see that at some point, maybe September or October, I shall just have to gird my loins, feed Sarah, and undertake a three-hour drive to the Gers for a proper dégustation sur place. And, being the prudent man that I am, find a decent restaurant (these are not hard to find over in Gascony) and a hotel for the night, before heading back here. 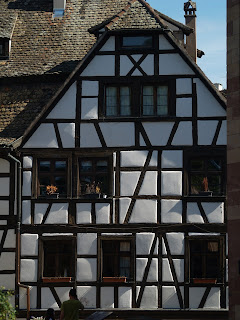 Otherwise, things are getting back to some new kind of normal: masks have become a reflex going into a shop (and I'll not tell you how bloody painful it was to have to wear one for seven hours on the train to and from Strasbourg) but out in the open not too many people bother - me amongst them, let it be said, but then we're both of us fully vaccinated so I'm not that bothered.
And the bise, or the hearty handshake, seem to have pretty much gone into retirement for the nonce. 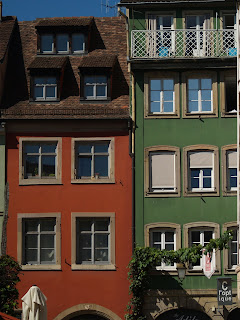 Time has gone by, as it does, and I once again find myself in Strasbourg, although admittedly getting ready to leave at an ungodly hour tomorrow moaning. Still, it was much more agreeable to actually be doing something useful, so I don't regret it, and this time one of the blokes at the company took pity on me and offered to take me out to see the Strasbourg night-life on Wednesday night. I'm very glad I took him up on that.
Out around the old port district to start with: it's been titivated and generally had shitloads of cash thrown at it, and is now positively heaving with crowds of Bright Young Things from various startups enjoying apéros on the riverbank. I need to go back there.
Then around the EU district, to have a gawk at stuff like the Palais de l'Europe and all the other institutions that are crammed into the city, then down Embassy Row where the US and Russian embassies sit sullenly next to one another, then find a car-park to get ready for the good stuff ie wandering around Petite France and the covered bridges ... 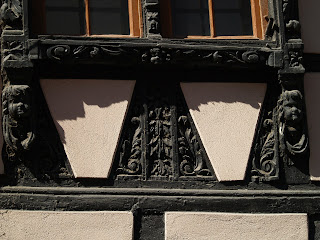 Wound up around the cathedral at about 21:00, and so of course it was time for a meal ... Le Gruber is a winstüb which, to my admittedly uneducated palette, seemed perfectly acceptable, and I must say that I have decided that I really do like a pinot gris.
And by the time we'd finished that it was, as luck would have it, time for the son et lumière projected onto the cathedral. It must have cost a mint, but the ville de Strasbourg really got their money's worth because it was breathtakingly spectacular. Absolutely magical, and even though they don't do it justice I shall try to extract some of my shite phone photos ... 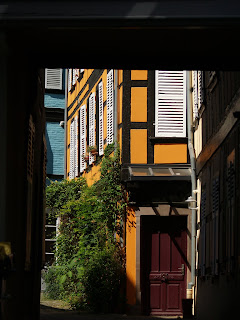 Bottom line, Strasbourg is a lovely city which has the added advantages of having a river running through it and loads of vast green shady parks and gardens (when I come back, shall have to spend a morning wandering about the parc de l'Orangerie): try not to miss it if ever you're over that way.
I should go and pack, for I have no wish whatsoever to be in a rush at 5:30 am: mind how you go.

This is the more or less irregular diary of the Bimler family - a couple of ordinary New Zealanders who, through no fault of their own, found themselves in France in 1987 and decided, for some strange reason, to stay. Settled down, raised a family, and lived happily ever after.

I've put it up as a blog for the simple reason that I can, and it amuses me to do so, and who knows - it might turn out to be an important historic document one day (although I rather doubt that).

The years from 1987 to 1998 are missing because Al Gore hadn't yet invented the intertubes, and I can't be arsed retyping the paper copies (they still exist somewhere on 5" floppies, but the Compaq transportable used to create them went to its rest a long time ago, along with the Ashton-Tate word-processing software).

Much to my surprise, OCR technology has improved beyond belief in the past 15 years. It even handles fantasy fonts like Unicorn and such without too many problems (apart from insisting on calling me "Tremor"). So I've actually started scanning in the old paper copies, starting in '87, and will get around to sticking them up at some point. Preferably when I've worked out how to get blogger to post things in the order I want, and not its bloody chronological posting order. It must be possible, I just have to read the help files ...

Been there, done that. Just had to go into "Post Options" and set the publishing date to what I wanted: bloody yank mm/dd/yy format of course, but I can handle that ... so as you can see, things are a bit more organised now. Might even get to sticking up a few more photos while I can: they'll only go back to 2003 mind you, 'cos that's when I got my first digital camera and I am so not going to go and scan in all the older photos. Although I suppose I could get some of them done ...

Just by the way, all the photos posted here are in fact mine, taken with the trusty if somewhat clunky old Olympus E500, unless otherwise noted. So no-one else is to blame if they're out of focus, or whatever. They're usually totally unrelated to the subject matter, and are there just because I think they're not too bad. You may disagree: if so, please feel free to keep it to yourself.